Here you will find all the Every Day Heroes in one spot. 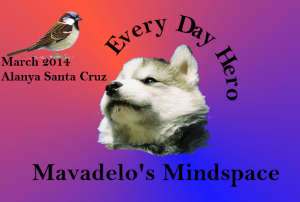 I know Alanya for many years now and although contact has faded away over the last years I still consider her an every day hero.

I met Alanya (in that time going by another (Dutch) name) when I was homeless just as she was. At that time she was hanging out with a group of people within the homeless community that was overlapping the group that I was hanging out and through mutual friends we got in contact with each other. I must admit that the moment I saw her I got a little crush on her and it was not difficult to become friends with her. (It too some time but I eventually told her about my crush which she appreciated but didn’t return)

During that time, which was one of the best periods in my street life, this group of about 10 people was supporting each other on the streets, we camped together on a camping ground, went to the nearby lake to swim or to the park to relax etc.

Then the time came that the N.O.I.Z was founded and she played a big part in that. She was the one that opened the door of the squatted building, she was one of the people talking to the city council, she arranged a lot inside the shelter and eventually she became a manager for the N.O.I.Z as well. Not a small feat for a girl who was taken from her country (Peru) and adopted at 9 months old and homeless since the age of 15.

(following part is taken from http://www.loscachorros.nl/english/documents/history.html )

With the foundation of NoiZ, Alanya regained control of her own life. Early 2000 Alanya heard about a “roots trip”. This trip offered adopted adolescents in the Netherlands a trip back to their place of birth in Peru. This was the occasion for Alanya to get back in touch with her adoption family and to together learn about her origin. Alanya left for Peru together with her adoption parents in 2000. Everything came together for Alanya at her motherland. This was her home! Seeing and experiencing the poverty, the beggars and the street children was not easy for Alanya, however. She immediately felt drawn to the street children’s fate. That is when and why she decided to do something for these children in her hometown Ayacucho.

Back in the Netherlands, Alanya gathered a few people and founded, with the idea of NoiZ in the back of her head, Los Cachorros on September 28, 2000. The following three years were all about fundraising, sponsoring activities, generating publicity and establish contacts in Ayacucho. It was until May 29, 2003 that the doors of the night shelter finally opened for the street children of Ayacucho. Since 2006, Los Cachorros also offers a 24/7 shelter. Apart from a house above their heads, Los Cachorros pays attention supporting street children in surrounding neighborhoods and offers education and information sessions at schools, police stations and other communities. What once started with sympathy for the fate of the street children in Ayacucho has grown beautifully into a successful shelter which has offered support to hundreds of kids in the past few years. Together with a team of streetworkers, social workers, psychologists, a nurse and teacher, Alanya is fighting for a chance of a better future for the streetkids.

As a foundation Los Cachorros (the cubs) is based in the Netherlands however the work is done in Peru of course. As non profit organisation it always can do with a little more help and fundings (yep here he goes again, asking yall money for poor animals or kids or poor people) but I figure you would like to know more about what her foundation is doing.

I think a worthy opener for my every day heroe section don’t you agree?

Los Cachorros – A home for street children . click the banner to find out how you can help

1 thought on “Every Day Heroes”